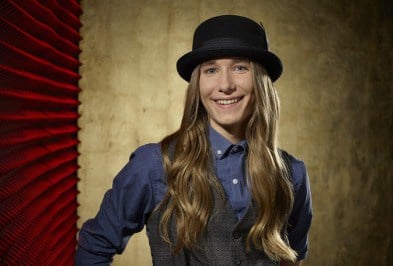 He’s the young man who won the most recent season of The Voice, and he has a very interesting upbringing and history. Sawyer Fredericks is a young man with serious talent when it comes to his singing skills, and he knew it enough to sign up and audition for this hit reality television show. When he was asked to join a team, he chose the very famous and very talented Pharrell Williams, and the two managed to make some history together. Fredericks is good; he’s really good. He’s smooth and he’s got a voice that just brings you in. It makes you stop what you are doing and listen to what he’s singing, and that is the kind of talent that really goes a long way in the industry. That said, what else do we not know about this reality television winner and amazing singer? Read on to find out.

He’s the youngest winner in history

When Sawyer joined the show and began filming, he was the youngest contestant of the season at just 15. He turned 16 during the taping of the show, but that makes him the youngest winner in history, though he is the same as the season four winner of the show. She was also 16 when she won, but it turns out she was an older 16 than he when she took home the title of the winner of her season. That’s pretty impressive, though, considering how much older talent is out there.

He does not go to school. It’s a hugely controversial method of education that many people do not believe in. However, his parents believe in the natural learning process of unschooling, which is why they use this method. Essentially, his life consists of him learning and spending time being educated in natural manners such as learning through experience. Play and trips and being outdoors is a huge part of his education, and he’s not really used to sitting down around books and things of that nature.

He grew up in Newtown

The young man grew up for the first half of his life in the town where a young man went crazy and opened fire in a school, killing many. Sandy Hook Elementary School is located in Newtown, and the young man in question was someone who never went there, but he could have gone to school there had his parents chosen to raise him in a manner that is more traditional. They did not, and he was never subjected to the horrors that occurred there so many years ago.

He’s the baby of the family

Sawyer is one of three boys, and he is the baby of the family. His older brothers were raised very much like he is, and they are all very natural and very open about their enjoyment of life. They all take to learning at home, and they are very close to one another. However, there is no word as to whether or not the other brothers have the same kind of talent as their younger brother when it comes to singing and showing off his various talents and traits.

It was in 2013 that the young singer released his first album, something he did independently. He’s always had a love of singing and he has always wanted to pursue his passions for this particular craft, so he worked very hard to do so when the mood struck. He’s been singing for years, and his first album release was a big deal for him. It obviously was not a studio backed album, which means it will never be overly famous, but it is a start for the young singer.

He was actually invited to try out for the show

Most people try out for the show of their own accord, but it was talent scouts for the reality series that invited Sawyer to try out for the show after they were given the opportunity to see some of his YouTube videos online. They believed he had serious talent, and asked him if he would like to be a part of the show.

He doesn’t want to move to LA

When he won this season of the hit singing show, the first thing he said is that he has no interest in moving to Los Angeles. In fact, he’s not a fan of the city itself. He’s a small town boy who would rather be back in his small town than in the midst of the busy and bustling city. Of course, at his age that’s completely natural since he’s not someone who has been out and about enough to really understand that sometimes moving to a bigger city is a good thing for your career.

He might have been born in Connecticut, but he moved to Upstate New York several years ago with his family. They live on a working farm and they enjoy the very simple pleasures that life has to offer. It’s a lifestyle that his family prefers, and they feel that it keeps their kids and their family in focus by eliminating some of the outside influences that life has to offer.

He’s from a close family

He, his brothers and his parents are very close. They spend a lot of time together at home learning and working their farm, and it’s kept their bond close. It’s something not many people can say about their own families, and it’s enough to make others slightly envious that this family has managed to do what so many others cannot.

Sawyer Fredericks is not the kind of kid you’re going to see on the cover of tabloids breaking up with his latest girlfriend, acting out or misbehaving. He’s a very simple young man who does not seem to have any interest in things of that nature, and it is why he’s going to be successful in his own right.