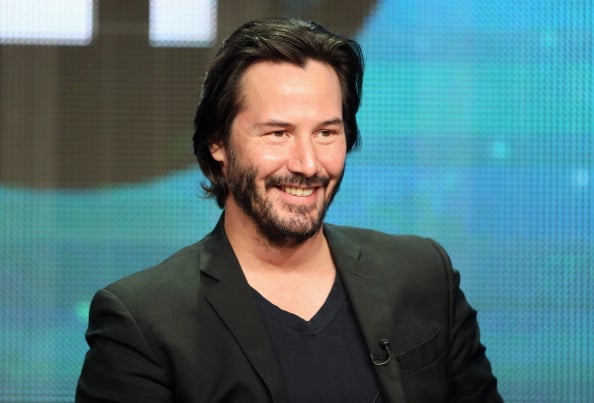 If you’re reading this right now, then that probably means you have access to the Internet. And assuming that that’s the case, than I would hedge a bet that you have seen or heard of the famous Keanu Reeves meme that has made its way around the Interwebs over the past decade or so, it seems. Thanks to the erratic and confused look on his face from his role in the movie Bill and Ted’s Excellent Adventure, Reeves has been the butt of jokes from meme creators for years, with several different words written over the picture to give it even more hilariousness. And because memes always seem to be the fun thing to look at or create to help pass time and get a point across, I figured I would take a look at the best compilations that people were creatively able to come up with on this one. So sit back and laugh at these, because there’s a good chance that, while they’re supposed to be in good fun, you may have actually thought of the conspiracy that is referred to in the meme yourself, which, if is the case, will only make these even greater to look at. So prepare to have your mind blown. 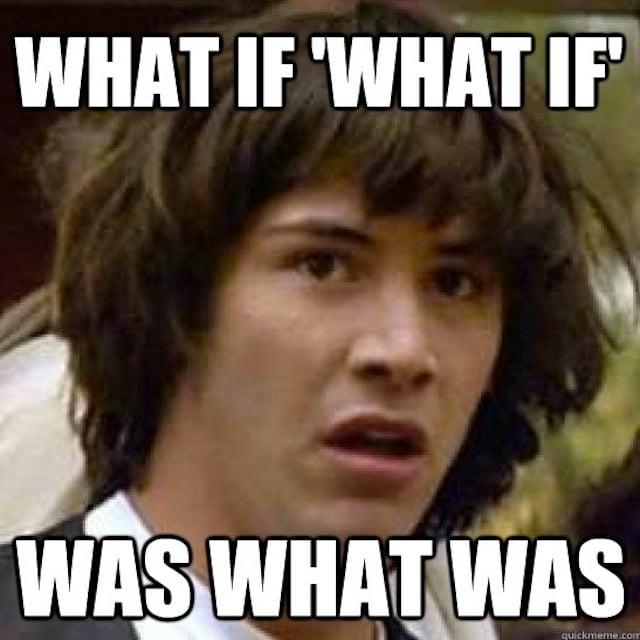 How deep is this one? I’m not really sure, but I can tell you that it makes my mind hurt trying to think about it. For that reason, I actually suggest not wondering what if what if was what was, because you’ll be confused, too, and probably spend too much time wondering if the wording is actually correct. 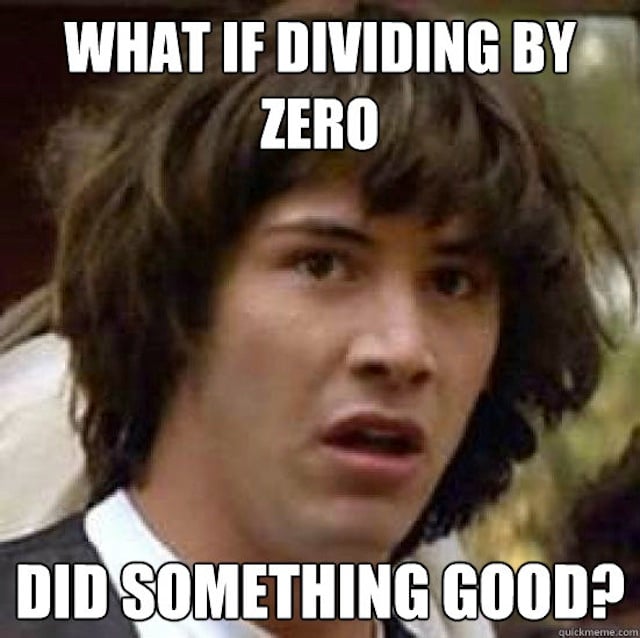 11. What If Dividing By Zero Did Something Good?

For those who aren’t as good as math as others, just remember that dividing by the number zero is always the number zero. So, yes, even if you have the number 500,000,000,000 and divide it by zero, you will always have a big donut. So what would happen if something good happened each time you did divide by zero? I would think more people would want to do it. 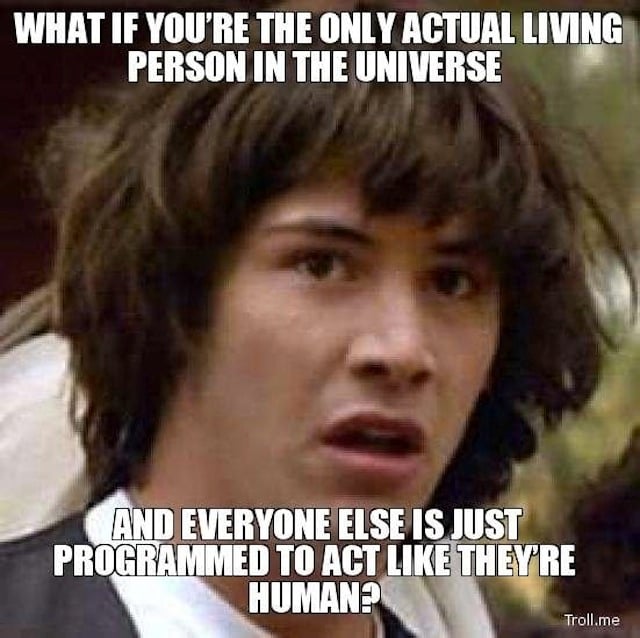 10. What If you’re the Only Actual Living Person in the Universe and Everyone Else is Just Programmed to Act Like They’re Human?

OK, does this one just scare anyone else? With all of the sci-fi movies out there that writers and directors are thinking up these days, I can’t help but actually imagine that this conspiracy might be real. While it’s probably not, seeing how we’re all living, breathing humans—on the surface—it’s kind of interesting to think about, isn’t it? 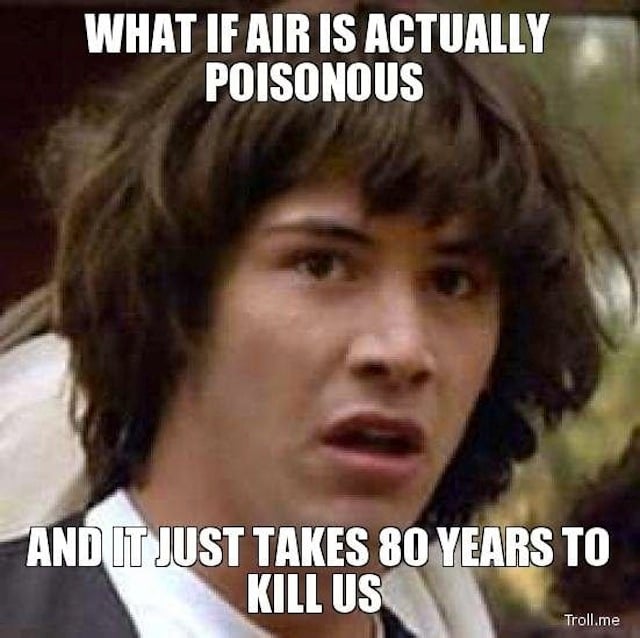 9. What If Air is Actually Poisonous And it Just Takes 80 Years to Kill Us?

Sure, this one might be impossible seeing how there are people out there who live to be longer than just 80 years old, but it’s still a little freaky. Heck, at the rate people are polluting the earth and all, this one might not actually be that farfetched in the long run. OK, I’ll refrain myself from going off on some Mother Earth tangent and just let you laugh at Keanu. 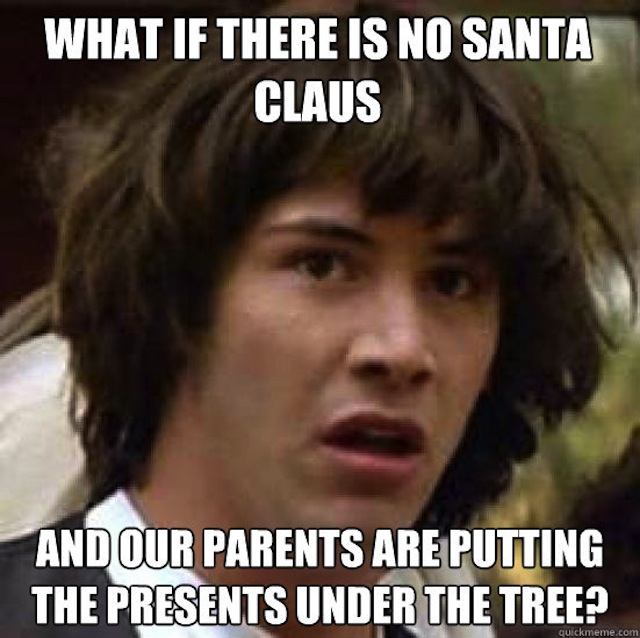 8. What If There is No Santa Claus and our Parents are Putting the Presents Under the Tree?

Wait, could this even be possible? I mean, I’ve heard rumors and all, but no parent would actually ruin the belief that Ol’ Saint Nick isn’t real, would they? No, of course not. Yes, there is a Santa Claus, and I’m sticking by that. How else can one explain how, in all of my 30 years, presents are only under the Christmas tree on Christmas morning and never before, even when I do stay up late? 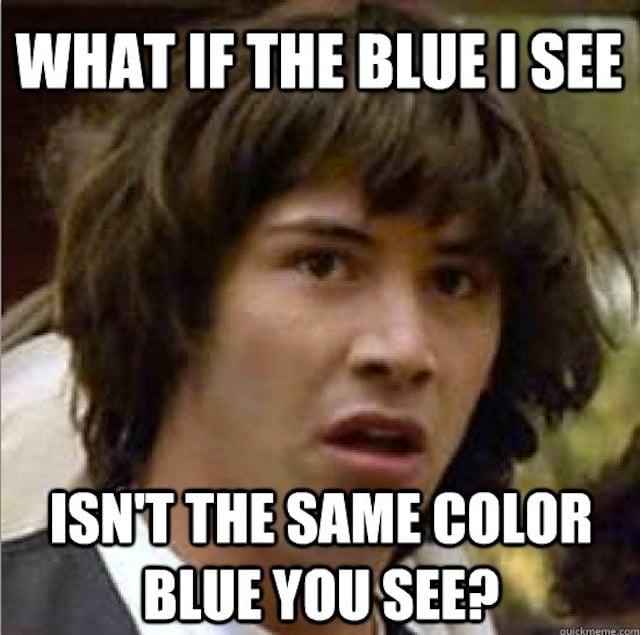 7. What if the Blue I See Isn’t the Same Color Blue You See?

Don’t even pretend that you haven’t thought about this one before, because, there’s a very good chance that we all have at one point or another. And who’s to say that it isn’t true? I mean, the color blue that I see in the sky is gorgeous and all, but it might appear different to your eyes and mind, right? If no two people are made the exact same, this one could be accurate—but it just can’t be proven. 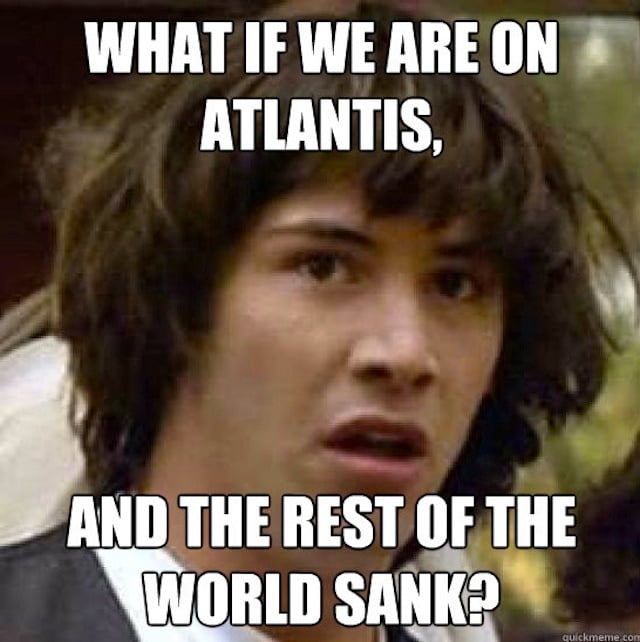 6. What if We Are On Atlantis, and the Rest of the World Sank?

Wait, is anyone else confused? Wouldn’t that mean that the rest of the world just basically got turned inside out? I don’t know the answer to that. In fact, each time I try to figure out the answer, my head starts to hurt and I get a little frustrated for not knowing, so I’ll just let you tackle this one. 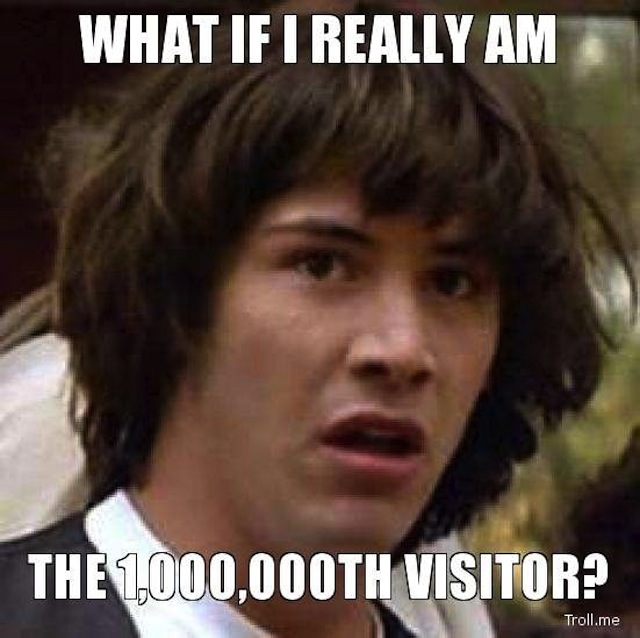 Don’t even act like you have never gotten an email, a text or some other notification that said you were the 1,000,000the visitor somewhere and that, to claim your prize, you needed to do some mundane task like click a link and register your email or provide a phone number to be contacted. While they’re scams 99.9 percent of the time, there’s a small chance one might actually be real, right? If so, I hope that you don’t overlook it. 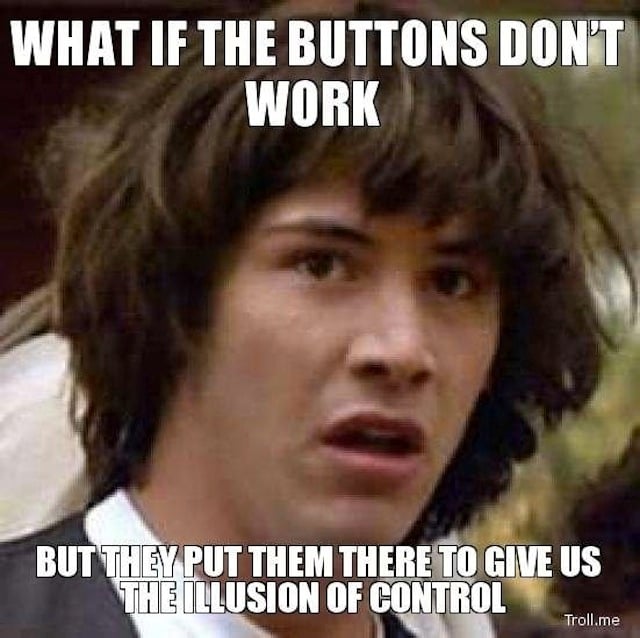 4. What If the Buttons Don’t Work, But they Put Them There to Give Us the Illusion of Control?

Am I the only one who sees a button and thinks that it absolutely always has to have some sort of reaction? I mean, that’s what a button is there for, right? To be pushed and have something happen if someone presses it. Whether that’s turning on a light or sending an elevator to a certain floor, if I ever saw a bunch of buttons that didn’t do anything, I might go nuts. 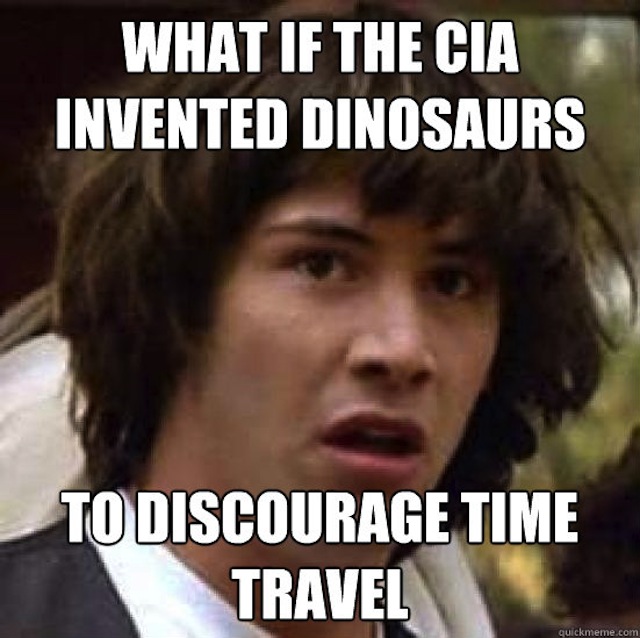 3. What if the CIA Invented Dinosaurs to Discourage Time Travel?

Actually, a very solid point by whomever created this meme, because, if time travel were a real thing, would anyone in their right mind actually go back to the time that dinosaurs wandered the earth? I would hope not, seeing how most of them were carnivores that would happily eat a helpless human. For that reason, maybe the CIA did invent the idea of dinosaurs so that, should people be able to go back in time someday, they don’t go to a period that might want to be hidden. 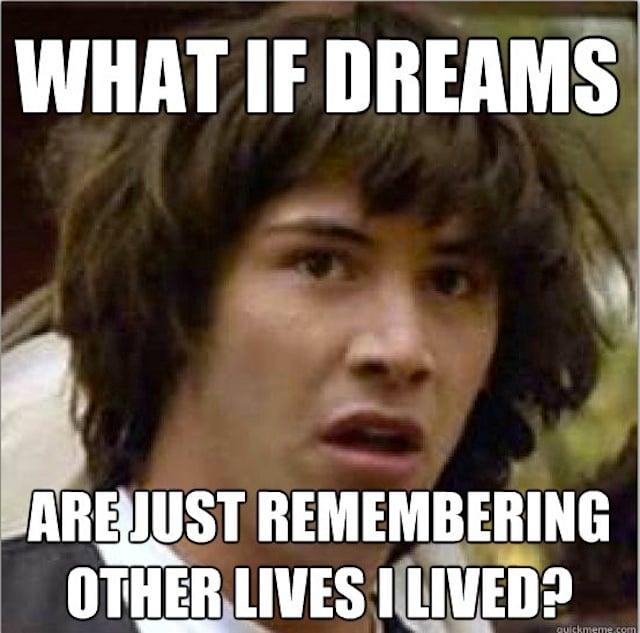 2. What If Dreams are Just Remembering Other Lives Lived?

One question with this one—is it our own lives lived, or someone else’s? Because, if our own, that wouldn’t be all that bad. But if it were someone else’s, well, now that’s where things get pretty freaky. It’s like identifying with someone you’ve never met before and living their entire life each time you close your eyes. Actually, that might be a pretty good plot for a story, so, well, I’m trademarking the idea right now, so hands off. 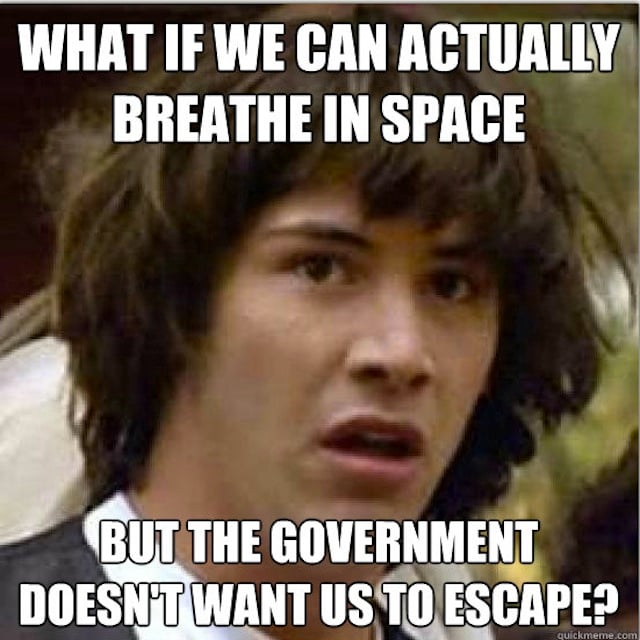 1. What If We Can Actually Breathe in Space, But the Government Doesn’t Want Us to Escape?

Has anyone known to try and conquer outer space without oxygen on their own without the government lending a hand in funding them getting there? Maybe, but who really knows? For this reason, this Keanu Reeves meme wonders if, in fact, there’s more than just Earth that we could actually survive on. I mean, we’ve all assumed that we’ll lose oxygen after getting a little bit too high up in the atmosphere, but we’re not exactly sure because we’ve never experienced it.

Graduate of the University of Kentucky. Cleveland sports fan. Frustrated respecter of LeBron James. Influencer of bad ideas. In addition to Worthly/Housely, I'm a regular contributor to Bleacher Report, Scout, Esquire and Maxim, and run or bike way too much for my own good when not writing. The day a Cleveland sports team wins a title is the day I can officially say my life is complete.

There is certainly no shortage of rich celebrities.  In the entertainment industry, it is not uncommon for stars to be earning salaries in the millions.  However, while there are plenty of rich people, very few…

During his time on Dancing With the Stars, Val Chmerkovskiy has become one of the most popular pros on the show. Fans just can’t seem to get enough of the smooth dancer, with a fun-loving…

We all know her and love her as a singer, dancer and performer, and she’s not too difficult on the eyes, either. Nicole Scherzinger has been part of our lives for years now, starting with…

Actor Harrison Ford has enjoyed a successful career that has lasted more than 40 years, and his resume contains well over 30 acting credits. However, things weren’t always so easy for Ford; in an interview…

When it comes to reality TV, Botched is definitely one of the most interesting and unique shows on the air. Similar to a real life version of the popular series, Nip/Tuck the show follows plastic surgeons,…

Over the course of her career, singer/songwriter Lady Gaga has become well-known for her elaborate costumes and extremely strong stage presence.  With her larger than life persona, it can be extremely easy to forget that…