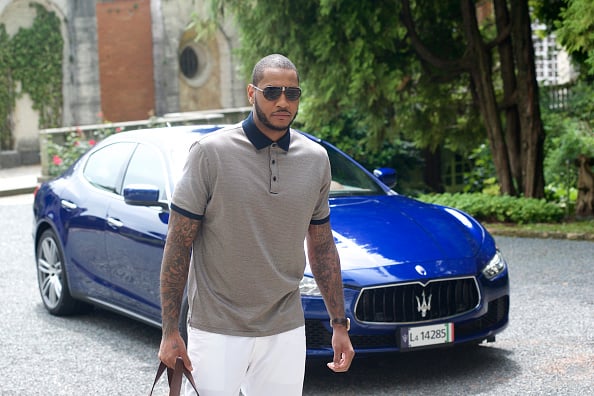 Carmelo Anthony is an American professional basketball player with an estimated net worth of $85 million. Born on May 29, 1984 in New York was raised by his mother since he was only two. His father lost a battle with cancer when Anthony was only two, leaving him and his mother to handle life on their own. His family moved from the Brooklyn projects to Baltimore, Maryland when he was only 8, where he had to learn the difficult way how to survive life. He was only 8, but he was already working on his basketball skills and learning to survive on some very dangerous and questionable streets in a city that was not friendly to him at his age.

A friend of Carmelo Anthony once told a reporter that growing up, the star had seen it all; from murder to drugs, anything that you might expect to happen in the most dangerous and destitute parts of a city happened in front of their faces more than the rest of us might ever be able to imagine. Fortunately for Anthony, his basketball skills were good enough at a young age that he recognized his own potential and his way out of the life he was living as a child. He began to practice all the time, using sports as a way to stay out of trouble and improve his life. He commuted for more than three years to Towson Catholic High School so that he could take part in their athletic program. He became a local celebrity by the time 2001 rolled around, and the world began to take notice.

He frequently missed classes, reveled in his fame and failed to take his team all the way. Because he was tall and thin and not quite big enough, no one really took notice of him as far as professional scouting was concerned. It was a moment in Carmelo Anthony’s life that would require his attention so that he could go all the way. However, he knew that college scouts all over the south were looking at him, and he used that as a way of making a bigger name for himself. From Syracuse to North Carolina, he made the choice to go to college and forgo a high school to professional career like some of his peers (Kobe Bryant, Amar’e Stoudemire and Kevin Garnett) had done. He made the decision to attend Syracuse, and he needed to fix his grades to make it happen.

He and LeBron James became friendly when they competed in a USA Basketball Youth Development Festival. It was at this point he was transferred to Oak Hill Academy where he was forced to play harder and stronger than ever before. After one of the most successful first seasons in college history, he announced he was going to enter the 2003 draft. It was no surprise to anyone having been called the best player in college basketball that season by more than one professional, and he was chosen third by the Denver Nuggets, with whom he played until the 2011 season when he decided he no longer wanted to play for Denver and decided to go play for the New York Knicks, where he is still playing.

Ellie Kemper is an American actresses and comedian with an…

Jennifer Aniston is an American actress with an estimated net…

Jaden Smith is an American actor with an estimated net…

Gigi Hadid is an American model with an estimated net…

Amy Schumer is an American actress and comedian with an…

Catriona Balfe is an Irish actress and model with an…