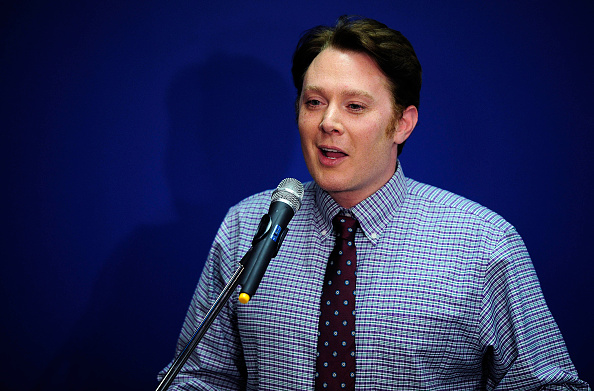 At the age of 36, Clay Aiken has had more careers than most people twice his age. He’s been an American Idol runner-up, he’s been a Broadway star, he’s been a politician and he’s been an activist. There are very few things that he has not done in his life, including helping a close girlfriend have the baby she’s always wanted despite the fact that the two were not in a relationship and Aiken is openly gay. The kicker there is that he did not make the announcement that he is gay until a month after the birth of his son in 2008. The baby’s mother is a co-worker and close friend of Aiken’s and the two raise their son in a way that works for them. It seems that since his singing career has not panned out exactly as he might have hoped, Aiken has taken to setting his sights on politics. He attempted to run for Congress in 2014 but fell short of making the bid in terms of financing his campaign.

However, despite the fact that he is not currently running for congress, we have to hear his voice and his beliefs the old fashioned way; on Twitter. So with that in mind, we’ve taken a gander at Clay Aiken’s twitter page and chosen our favorite Aiken tweets. It’s shown us that despite his lack of music on the radio these days, there is a reason so many of us loved him when he made the bid to become Idol.

We’d be a little confused, too, Clay Aiken.

It is a clever concept, is it not?

Photo by Jeffrey A. Camarati/Getty Images

Since airing in May 2014 Lifetime’s Little Woman LA has become one of the most popular shows on the network. Starring a cast of feisty little women living in LA, the show follows their lives…

Brody Jenner is one of those guys famous for being famous. He’s not done anything in his life to warrant his fame, other than being born to a famous family. Did we mention that family…

Marisa Tomei rose to fame during the late 80s for her role in TV shows such as As the World Turns and A Different World.  However, the 1992 film, My Cousin Vinny, boosted Tomei’s career…

As one of the newest cast members of The Real Housewives of Orange County, Shannon Beador has jumped head first into one of the craziest and most entertaining reality TV franchises on TV. Although the women…

Being a celebrity may come with a lot of perks, but it also has its shortcomings.  Living a life in the spotlight means that countless people have access to you – and in many cases…

When you’re one of the most famous athletes in the world, you can do pretty much whatever you want. When David Beckham began his career playing soccer, he had no idea his life would turn…