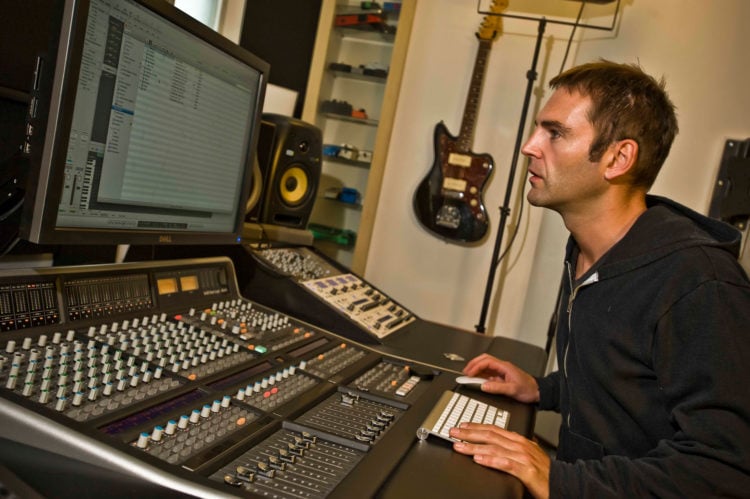 Johnny McDaid was born, John McDaid on July 24, 1976 in Derry, Northern Ireland. He is an Irish singer, song writer, and record producer who is best known for his work on some popular shows. He is the piano, guitar player and sings backup vocals, for the band, Snow Plow, an alternative rock band. He has been seen in the tabloids a lot over recent years, and it’s not all due to his music. His personal life has gained him attention and interest because of who he is often seen with, and she happens to be one of the biggest names in Hollywood. Friends vet, Courtney Cox and Johnny McDaid have been a hot item in Hollywood, and are even said to be engaged to be married. You may have heard of McDaid’s music, and band, Snow Plow, and know a little about the name, but here are 10 things you didn’t know about Johnny McDaid.

According to celebrity tabloids, there were assumptions that Johnny McDaid was gay, however, his on-and-off relationship with popular hit series, Friends actress, Courtney Cox, seems to have proven otherwise. He was engaged to Cox back in 2015 and the engagement was eventually called off. The latest news now, however, is that the engagement is back on. Maybe the second go-round will end in a walk down the aisle for the Irishman.

2. Younger than his fiancé

In the celebrity world, it is not uncommon for couples that hook-up to have a big gap in age. While a lot of times, older celebrity men will be seen in public with their much younger girlfriends, it happens the other way, too. In Johnny McDaid’s case, he is the one who is the younger one in his relationship with Courtney Cox. At 40 years old, it makes him 11 years Cox’s junior.

3. Why engagement was ended

4. Dated an Irish beauty after his break-up with Cox

Three months after McDaid and Cox’s relationship ended, it was said that McDaid met Irish beauty and former MTV reporter Meghann Scully on the red carpet of the Oscar Wilde Awards while Scully was working. He was smitten with her right away and the two hit it off. There were pictures of the two at the awards show getting cozy, but apparently the relationship didn’t work out, since the news is that he’s back to being engaged to Cox.

5. His type of music may surprise you

When you hear of an Irish musician, you may automatically think their expertise is with Irish music but this is not the case with McDaid. McDaid writes, plays, and produces a variety of music styles and is best known for alternative rick, dance music, pop music and Indie rock. His music has been featured in hit TV shows, as well as movies, and have been used in various ad campaigns.

His band, Snow Patrol, was organized back in 1993 and were originally producing their songs under different names. Before Snow Patrol, the band called themselves Shrug, followed by Polar Bear, before ultimately they moved to the moniker, Snow Patrol and have stuck with it. The band couldn’t get a break with their music and get it into the mainstream, until 2003, when their album, Final Straw, was released. The album was a huge success and it really shined a light on McDaid’s take on melancholic rock music.

7. His music has been featured in several popular shows

If you aren’t familiar with Johnny McDaid’s music, you may heard it and didn’t realize it, if you watch any shows that his music has been featured in, or have seen any HBO campaigns that have used his music. One Tree Hill, is one show that has used his music, along with Pushing Daisies, and Defying Gravity. He has also had his music used for the trailer of the theatrical trailer, My Sister’s Keeper, and in the movie, Sisterhood of the Traveling Pants.

8. Has a studio based out of London

Although McDaid spends a lot of time in Malibu, California, he spends a great deal of time in London, where he has one of his studios. Fieldwork Music is located in Northern London and is where he writes, produces and puts together mixes for a variety of songwriters and artists. He has used Fieldwork as the project name for multiple song releases.

9. Last band to be featured on popular show

Snow Plow was the last band to ever be featured on a long-running, popular BBC show that was cut form the airways in 2003, Top of the Pops. The show helped to get Snow Plow’s music heard, and then the show went off the air. Since then, Snow Plow has worked to really make a name for itself and has finally been able to even build its name in the US.

Johnny McDaid has a reported net worth of about $5 million. The net worth comes from multiple sources, including, income from record sales, personal property, luxury properties, such as planes and yachts, ad campaigns and more.

We all know we still think of Kim Kardashian when we think of Reggie Bush. Truth is, we think that was part of her plan. So do you think Reggie Bush will invite Kimye to…

‘America’s Got Talent’ revealed some more semifinalists during its results show last night. Twelve acts competed last night in its quarterfinals show that saw Forte get a standing ovation and Tone the Chiefrocca drive the…

This seems like part of the plot in Runner, Runner. Ben Affleck was reportedly caught counting cards during a game of blackjack in Las Vegas on Tuesday, April 29. The 41-year-old actor was approached by security…

Most everyone is familiar with Reddit, and the fact that the social news website is owned by Conde Nast. This is not a site that works like other news sites. Reddit actually bases their news…

Adam Levine and Behati Prinsloo have been married a little over a month and they’re already talking children. No, they don’t have any announcements to make just yet, but that doesn’t mean that the Maroon…

Is there trouble in bestie paradise for former Hills stars Whitney Port and Lauren Conrad? After all, Port did not attend Conrad’s wedding last weekend in California, and it wouldn’t be the first time that…