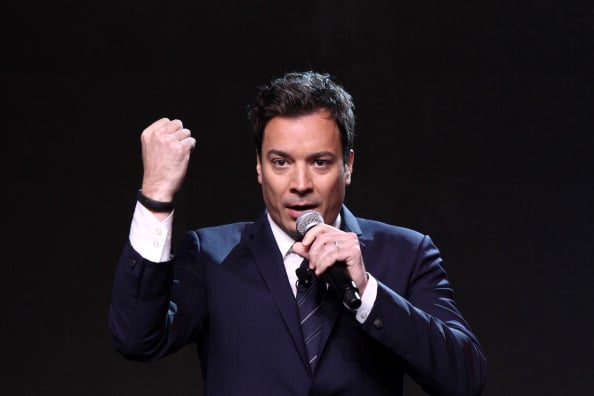 Get ready comedy fans; things are about to get crazy in April 2015 when Jimmy Fallon, John Krasinski and Stephen Merchant come to television with their own show. It’s called Lip Sync Battle and it’s coming to televisions near you in just a few short months. The late-night bit that Fallon likes to do with some of his guests is such a success that it’s been ordered for a season as its own show. The purpose of the show is to have celebrities sound off (see what we did there?) in a battle of the lip syncing type to some of the most famous songs of the moment.

All three will serve as producers and they will also take the mic and do some performing of their own. Other information about the show has yet to be announced, but it does seem that it’s happening rather quickly. It was just announced that the show is actually going to be taped in January, which is just over 5 weeks away.

“Lip Sync battling is one of the coolest things happening in pop culture right now and already has a huge fan base thanks to the amazing talent involved. We’re thrilled to be in business with producers as talented as Jimmy, John and Stephen as Spike broadens its programming in new and exciting ways,” said Jay Patterson of Matador.

There is no word yet on who might come to star on the show and battle one another, but given the celebrity power behind the show at the moment, we are willing to bet some pretty big names are going to stop by and do a little singing. These are some famous, funny guys; and people are going to want to spend some time working with them since everything they do is so successful.

George Clooney has a thing for the British, it seems. Not only is the handsome heartthrob about the exchange vows with a British woman and end his lifelong bachelor-lifestyle, he’s also going to pay a…

It was 2002 when American Idol first debuted, bringing to our attention the fact that Paula Abdul might be a little bit crazy, making Simon Cowell famous with his mean nature and proving that the…

She might no longer be a part of The View, but that doesn’t mean Jenny McCarthy is done with television for good. In fact, the newlywed is going to be back on television before you…

Yesterday Jenny McCarthy and Sherri Sheperd taped their final episode, which will air on Monday, August 11, as co-hosts on ABC’s hit talk show, The View.  The two announced their departure earlier this summer, with…

Ever since it was announced that Boy Meets World’s Cory and Topanga were coming back to televisions all over the world in a new series called “Girl Meets World,” in which the high school sweethearts…

The Super Bowl is still months away, but it appears that the NFL has decided upon the act they’d like to see during halftime, and it’s sure to please. Katy Perry is going to be…