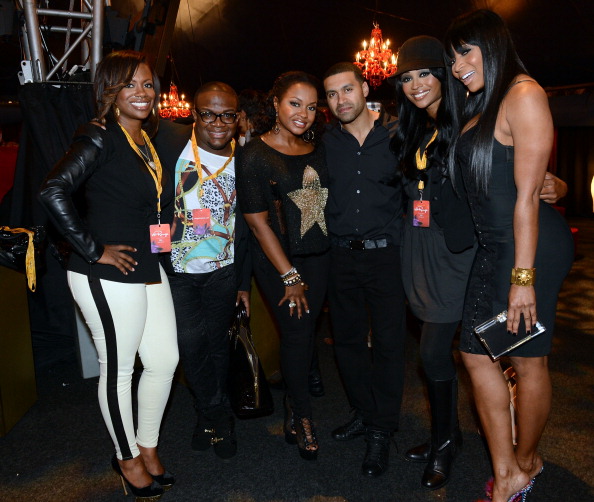 Bravo’s The Real Housewives of Atlanta, is the most popular show in the franchise.  Over the years, the series followed the lives of a group of very real women in Atlanta, and viewers have fallen in love. Although the show is filled with lots of backstabbing and drama, there are also countless humorous moments that have become part of the shows history.  Whether the girls are serving up some tea after a nice afternoon of shade,  or they’re just spreading rumors.  These ladies know how to turn almost anything into a joke.  Thanks to all of the dynamic personalities that work together to make the show a huge success, here are the 10 funniest moments in the history of The Real Housewives of Atlanta.

Gone with the Wind Fabulous.

Since joint the cast of RHOA, former pageant queen, Kenya Moore, has become pretty well-known for her funny one-liners.  Most famously, she referred to herself as being “Gone with the Wind fabulous” while the ladies were on vacation during season five.  Of course, the statement would not have been complete without a good twirl. Kenya even went on to turn the phrase into an entire song.

Nearly five years ago, Cynthia became the talk of RHOA news everywhere when she presented her former friend, NeNe Leakes with a friendship contract which pretty much outlined the rules of their friendship.  Although it was a sweet gesture, there was something about it that just screamed middle school, and even NeNe was a little freaked out by the whole thing.  Unfortunately, the contract wasn’t actually a binding agreement, and the friendship between the two has since declined.

Kandi’s mother, Mama Joyce, has had several very entertaining moments while on the show.  Her inability to like any man in Kandi’s life has become the focal point of her storyline, and there’s absolutely no shame in Mama Joyce’s game.  During a meal with Kandi’s now husband, Todd, Mama Joyce decided to lay down the law after making it very clear that she did not think Todd was good enough for her daughter.  She famously stated: “Ain’t no mountain high enough. Ain’t no ocean deep enough. Ain’t no desert hot enough to keep me off your a**, baby!” Umm, okay Mama Joyce.

Don’t be Tardy for the Party.

Even before the show, former real housewife, Kim Zolciak had dreams of pursuing a singing career.  With the Kandi’s help, Kim was able to record a single, “Don’t be Tardy for the Party,” which ended up becoming a huge hit.  As if the song itself wasn’t funny enough, the fact that Kim can’t actually sing – at all – made it even more hilarious.

When Kenya stated: “Everyday somebody thinks I’m Beyonce!” most people probably thought she was joking.  However, when it became apparent that she was serious, the situation got even funnier.  It’s no secret that Kenya can be a little delusional at times.  Seriously, it’s extremely hard to believe that anyone who has ever seen Beyonce could actually think that her and Kenya resemble each other.

Phaedra prides herself on being a classy southern bell, so everyone was surprised when her baby shower was a hot mess. There was just a lot going on, and the rhinestones around her eyes certainly didn’t make things any better. In fact, Kandi even labeled the event “boughetto” (bougie and ghetto), and it seemed like most people would agree.

Kenya and her boyfriends.

When it comes to Kenya and her men, everything must be taken with a grain of salt.  She probably doesn’t intend to make people laugh with her relationship issues, but it’s pretty funny to watch her act crazy all the time when it comes to her men. The first boyfriend she had during her time on the show, Walter Jackson, later admitted that he was being paid to pretend to be Kenya’s boyfriend (anyone who saw that season knows he did a terrible job, so hopefully he didn’t get paid too much). But things started getting really weird when Kenya claimed to be dating some wealthy man from Africa who no one really ever saw or met.

Porsha and the underground railroad.

Former RHOA cast member, Porsha Williams, is the granddaughter of the late Civil Rights activist, Hosea Williams.  You’d think with such an important connection to black American history, that Porsha would know some pretty basic facts.  However, during a trip to church that was once used as a stop on the underground railroad, Porsha showed everyone just how clueless she really is.  After the tour guide explained that church was used to help free slaves, Porsha was left with a burning question: who drove the train? THE TRAIN, Porsha? Seriously?

Sheree Whitfield may have been pretty and dainty, but she sure wasn’t one to be played with.  No matter what, she never backed down from a challenge, and during an argument between her and Kim, Sheree decided to go for the gold: Kim’s wig.

Sheree’s “who gon check me, boo?!” is one of the funniest moments to ever hit RHOA. After arguing with her party planner, things got really heated, and Sheree had to let it be known that money or not, she knows more than a few people back home who are ready for a fair one.

The first installment of the Real Housewives of New Jersey…