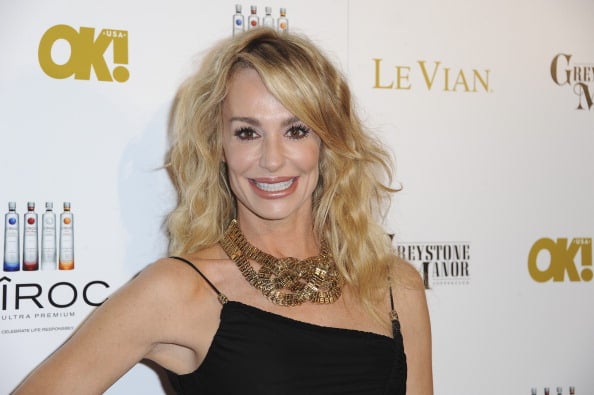 Taylor Armstrong has led a very interesting life to date. We all remember her as one of the original real housewives from Beverly Hills, and we know that she had some serious issues in her life. Whether or not you watched the show, you likely saw her life unfold in the press. She was severely depressed according to her friends, and her husband was in the news for being a financial crook. There was some debate over whether or not he was abusing her in any way – and her friends and the world strongly suspected for a long while that he was – and then he committed suicide. It was such an awful story, and she likely regrets that it was played out in front of the world so that everyone could see it.

However, Taylor Armstrong seems to have found her happy ending. She’s living a life that she seems so much more comfortable with now, and she wants the world to forget about all the tragic things that happened to her in the past. There are just some things that she does not want the world to know.

Many women are particular about their age, and they’re not all too keen on having it plastered all over the world. However, Taylor Armstrong really has no choice. She’s a famous face and that means that no matter how much plastic surgery she has, everyone will know her age. She’s turned 44 this year, and she’s certainly looking lovely.

Taylor Armstrong is not her Real Name

She Denied being Abused

It’s so easy for those of us in healthy relationships to say that we would leave in an instant if our husband’s ever abused us. However, Taylor Armstrong denied the abuse in her marriage for many years. She lied to her friends about it, and she only opened up about it after it became a well-known fact on national television. She then opened up about it and began talking about how much more difficult it was to leave than she thought because her husband made her feel so stupid, insignificant and made her fearful for her life if she took their daughter and left.

She has a Titanium Mesh Implant

Taylor Armstrong suffered serious abuse at the hands of her husband. He once hit her so hard and so many times in the face that she was forced to get a titanium mesh implant to hold up her right eye. He damaged her face so badly that she left him, filed for divorce and made it clear to the world that he was beating her up.

Her Husband Killed Himself after She Left

She’s been Accused of Being a Scam Artist

In the first episode in which she appeared on reality television, Taylor Armstrong said to her new friends that her marriage was 80% business and 20% pleasure, and that was kind of shocking. No one knew about the abuse at that point, and it turns out that many people have come forward from where the couple lived before they came to Beverly Hills to announce that she was behind many of her husband’s financial schemes and that she was in charge of much of the fraud that her husband committed before he took his own life.

She Pretended “Ford” was her Maiden Name

She’s changed her name more than four times now, and when Taylor Armstrong first married her former husband, she used her pretend maiden name, “Ford” to trick people into believing she was part of the Ford Motor Car company family so that they would trust her and invest their money with her husband.

There is no denying the fact that Taylor Armstrong sometimes comes across as a dumb blonde when she’s on television. She’s silly and a little bit over-the-top when it comes to certain things, and she has a reputation of being someone who might not be all that bright. However, Tom Crosswaite, a business associate of her ex-husband, claims that she’s changed her name four times to hide from people she’s scammed and that she’s in charge. He said that she was the head behind the scam and that she was in control. That makes people question whether or not she fabricated her abuse so that she could garner sympathy from people across the country.

She Lied about her Business Partnership with Eva Longoria

Did you know that Taylor Armstrong once told the world she owns 51% of the restaurant Beso, owned by famous actress Eva Longoria? Well, it turns out that official court documents state that she only invested 2% into the business so while she is actually part owner, she is not the majority owner and she is grossly misrepresenting her working relationship with the actress and her company.

Many of the people that deal with Taylor Armstrong state that she has an offshore bank account with millions in it that she took from investors and blamed on her husband. That’s when she began showing people that she was this abused housewife with a mean husband who was making all these illegal business deals without her knowledge. Many allege that she played her part perfectly and came out of it with flying colors.