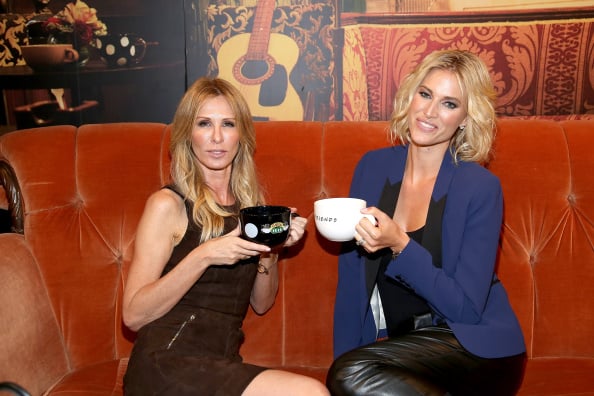 She is among the most interesting of all the housewives, and that’s what makes Carole Radziwill so fascinating to so many people. She is the real housewife from New York City that tends to be the one that people take the most seriously, and she is often the person that makes the most sense. That’s not to say that she’s not above the fray in terms of the cattiness that does tend to surround women no matter their age, but Carole Radziwill is a class act. The former news anchor and producer has had her share of rough years, but she’s pulling through and she’s making a name for herself in the process.

If there is one thing that she is known for, it’s her New York Times best-selling books. She’s not only an author; she’s a good one, too. The real housewife might make friends and cause some controversy among the cast of the hit reality series she’s she been on the show since season five, but she’s one that has intelligence that goes far beyond that of many of the other women on the show simply because of her life experiences. She might not talk much about certain things, but that doesn’t mean there is a lot about Carole Radziwill we don’t know, and a lot she probably does not want us to know.

Carole Ann DeFalco Radziwill is her legal name, but not entirely. Technically, the appropriate way to address her would be Her Royal Highness Princess Carole Ann DeFalco Radizwill. Her late husband, Anthony Radziwill, was the only son of Prince Stanislas Radziwill of Poland. The customary manner in which his father’s country insists upon is that he is considered a prince and any wife he takes, a princess. However, she does not use the title.

She’s Related by Marriage to the Kennedy’s

While Anthony Radziwill’s father was a royal from Poland, his mother’s family were sort of American royalty. His mother, Lee Bouvier, is the sister of Jacqueline Kennedy Onassis, wife of JFK. That makes the Kennedy children Radziwill’s cousins.

She was Good Friends with Caroline Bessette-Kennedy

Through her marriage to her husband, Carole Radziwill made many friends. One such friend was the wife of her husband’s cousin, John F. Kennedy, Jr. Caroline Bessette-Kennedy and her husband were dear friends of the couple before their tragic demise. And while she has no problem with the world knowing this, it’s not an easy memory for her because it brings back so many things that happened to her at one point.

We all know that her life has been a glamorous one, but she doesn’t like for her fans to know that 1999 was the most awful year of her life. It’s a year in which she suffered the most loss, the most heartbreak and the most awful moments of her life. Her close friend and her husband’s cousin, JFK Jr. and Caroline, were killed in a plane crash. It was only four weeks later than her husband lost his battle with cancer. The year was awful.

Carole Radziwill was born in August, which ended up being a month of tragedy for her in 1999, 1963, which makes her 52. Again, this is public knowledge, but it’s not the type of public knowledge that any woman loves to have the general public know about her. She works hard to maintain her youth, and it’s not always easy when people know just how old you are.

Her Mother-In-Law is Embarrassed

If there’s one thing that many people in the world agree upon, it’s that mothers-in-law are not always the biggest fans of the women their sons marry. It might have something to do with the fact that many mothers feel that no other woman is good enough for their son (true story) and that makes the relationship tough from the start. However, Carole Radziwill’s mother-in-law, Lee, is not overly thrilled with the fact that her late son’s wife has decided to take up reality television. She finds it tacky and not really something she condones.

There are Claims She Fabricates Stories

During her first season on the RHONY, she told the other ladies that since her husband’s death in 1999, she’s dated on occasion. One of the men she claims she’s dated is George Clooney. However, he has reportedly called her claims outlandish and untrue, and it also seems that there are no photos of the two of them together, which is something rate and very unlike the press not to have gotten hold of at this point. There are claims that she’s lied about this, and it seems that might be true.

Carole Radziwill has a net worth of approximately $50 million. While she’s earned a nice profit from the sales of her books, she received the vast majority of her money from her late husband when he passed.

She’s a best-selling author, but some of her former co-stars have accused her of using a ghost writer to write her books for her, claiming that they are not something she could have done on her own. She denies claims that this is true, but many people do not believe that she wrote any of her own books and they maintain the belief that she hires out to do this for her and then takes the credit for it herself.

She Lied about her Husband’s Mother

When she went to pick up her husband’s ashes in London, she wrote an open letter to her fans discussing how difficult it was for her to allow cameras to follow that part of her life. However, it turns out that she said in the letter that she and her mother-in-law share a lovely relationship. It’s been said that if there is one thing that Lee Radziwill and Carole Radziwill do not have is a close relationship, and that’s kind of sad.