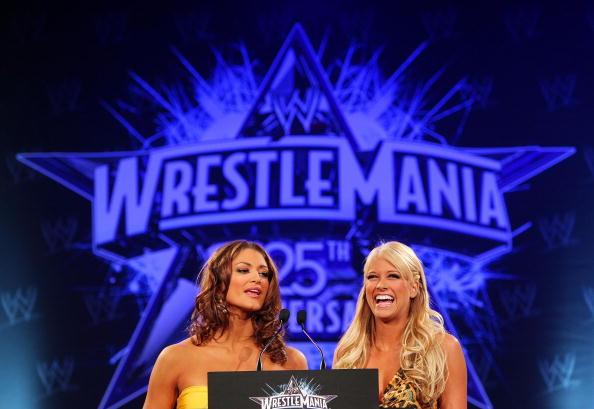 With just a few episodes under its belt, E!’s new series, WAGS, is already making quite the name for itself. Featuring the wives and girlfriends of successful man in the sports industry, the show is taking an interesting perspective on relationships with a pretty entertaining cast. Among the show’s cast member is a name and face you may remember from other projects, Barbie Blank. Although this is her first time in reality TV, Barbie Blank has been making a name for herself in the entertainment industry for almost a decade. Although fans may think they know her from her other work, seeing her on a reality TV show will definitely be an eye opener for many viewers. Here are 10 things you didn’t know about Barbie Blank

She had a pretty impressive career with the WWE

If you’re a fan of professional wrestling, there’s a pretty good chance you’ve heard of Barbie Blank. In 2006, she was offered a contract with World Wrestling Entertainment (WWE). For the next several years, Barbie became a fixture in the WWE, competing in several matches, and earning a WWE Divas Championship. Throughout her career, Barbie was definitely very popular among fans and she remained so until being released from her contract in 2012. Even after parting ways with the WWE, she continued to keep her wrestling career going with North East Wrestling. In a recent interview, she discussed a possible return to the WWE starting, “Never say never. I loved being in the WWE and I owe a lot of my success and where I came in my career to them. So I would never rule out a return — maybe a one-night only thing, you never know!”

Although she’s already had a successful career and has many accomplishments to her name, Barbie Blank is only 28-years-old. Even by the standards of the entertainment industry, that’s still pretty young, and who knows what else she will go on to accomplish as she gets older.

She was once a gymnast

Although many people think professional wrestling is ‘fake’ many professional wrestlers have serious athletic experience prior to entering the ring. Prior to her work with the WWE, Blank was a trained gymnast who was forced to end her career due to a serious injury. Blank was also once a cheerleader. Her background in athletes probably proved to be pretty useful once she became a wrestler.

She was in a music video

At the height of their popularity, music videos were once one of the most entertaining things on TV. If you’re old enough to remember the days when MTV played videos, you know how cool it used to be to watch the latest videos. Seriously, there was once a time when just appearing in a music video could really do something for a person’s career, and there are several ‘models’ and actresses who actually got their start as video girls. While Blank wasn’t exactly what you would call a video girl, she did appear in a music video for “Throw It on Me” which was featured on Timbaland’s 2007 album, Shock Value.

She’s engaged to an NHL player

Like the rest of the cast members on WAGS, Blank is romantically involved with a professional athlete. In August 2014, she became an engaged to former professional hockey player, Sheldon Souray who played 13 seasons in the NHL. During his career Souray made quite the name for himself and holds the record for “most single-season power-play goals by a defenceman” with a total of 19.

She knows the trick to having great work-life balance

As you could probably already know, working a busy schedule and trying to have a personal life, but Blank says that she’s found a way to get things under control. According to Blank, “I’ve always been able to find balance when I’m working, being on the road 300 days a year with WWE definitely taught me a thing or two about that. I just love to be working and doing something I love so planning a wedding, filming a reality show and working on my new fitness venture has kept me busy and I love it!”

She has a diverse background

Born in Florida, Kelly has lived in and traveled to various places, largely thanks to her career. Also, she was born to a Jewish father and a Christian mother, although she doesn’t open stop which, if either, religion she prefers to practice.

She was a huge Stone Cold Steve Austin fan

From the mid 90s to the early 2000s, Stone Cold Steve Austin was one of the most popular professional wrestlers in the world. Throughout his career, Austin smacked countless people around in the ring, and created one of the most popular catchphrases in wrestling history. Barbie Blank cites Stone Cold as her favorite wrestler and recently she got the pleasure of being interviewed by him on his podcast, The Steve Austin Show.

Although wrestlers and models might not seem like they have much in common, that isn’t the case with Barbie Blank. Before beginning her career as a wrestler, Blank was working as a model – something she continued even after becoming a wrestler. Throughout her modeling career, she landed various modeling jobs including working with Venus Swimwear and Hawaiian Tropic.

For someone who’s always wanted to work in TV, it’s a little ironic that Barbie Blank will now be a reality TV star. During her college days, she studied broadcast journalism with the hopes of one day becoming a TV anchor.

Thanks to reality TV, people can now become extremely famous…

New Internet sensation, Natalie Halcro,  one of the women in the…