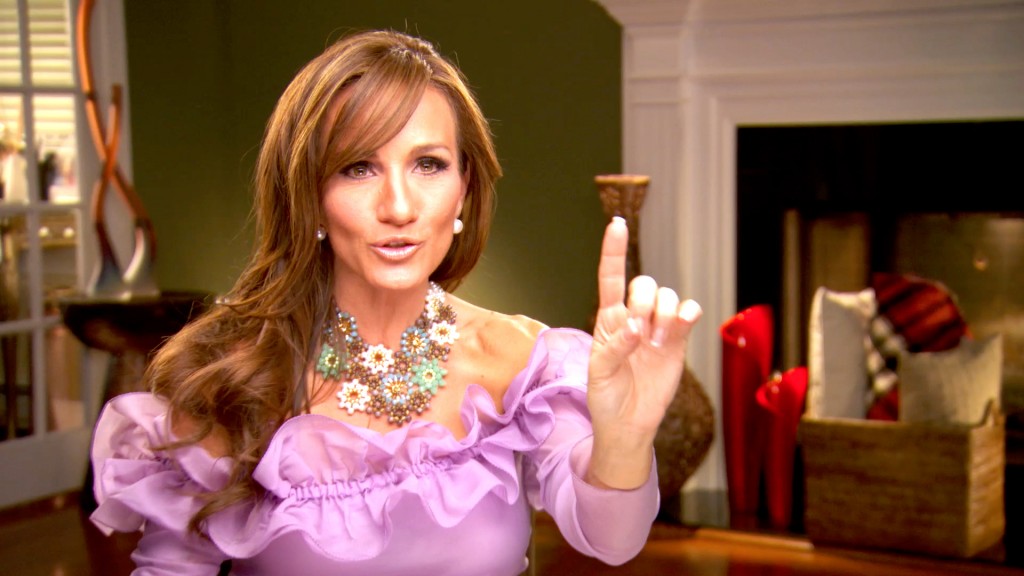 She’s one half of the ‘twins’ as they are referred to on The Real Housewives of New Jersey, and Nicole Napolitano doesn’t mind being referred to as one half of a set. In fact, she thrives on that. She’s the twin sister of Teresa Aprea, and the two are among the newest members of the real housewives franchise. Of course, Jersey hasn’t come back to television yet, and there is some speculation that it will not be back until the original Theresa (Giudice) is released from prison this December so that the show can film with her present. Of course, that’s just speculation and we have no idea whether or not it is true.

Nicole Napolitano, however, is rumored to be back when the show returns though her twin sister will not be back. Nicole Napolitano is fiery, fierce and not even remotely interested in hearing what other people have to say about her family unless it is something favorable, and there’s still a lot we don’t know about her.

We never got to see Nicole Napolitano’s kids when she filmed the most recent season of the hit reality show, and it’s probably because she was always at parties and going to events rather than at home. Her home life was featured around her firefighter boyfriend with whom she was hoping to marry. That’s about the extent of how personal her storyline got. However, she does have two teenage sons in high school.

If she has one passion in life, Nicole Napolitano states that it is fashion. She loves clothes and couture and she loves shoes. She feels that she has to get dressed up for just about everything from an event to a trip to the mailbox to grab her mail in the yard. It’s how she feels most comfortable, and we are all right with that.

Okay, she’s not the one jet setting across the world, but Nicole Napolitano is a travel agent of sorts who helps very high profile, very wealthy clients manage their time and money by booking them high-end private flights and charters across the world. She doesn’t talk much about it, but the world on the ‘street’ is that she’s actually quite good at it.

She might not seem as if she has a very significant net worth considering she lived at home with her parents on season six of RHONJ and works as a travel agent, but Nicole Napolitano is reportedly worth $5 million. It’s assumed she earned the bulk of her net worth through the business she ran when she was still married and home with her boys, and through her current career.

She Ran a Restaurant when she was Only 20

If you ask Nicole Napolitano what she was doing when the rest of the world was at college partying hard and having a good time at football games, she was busy running her family’s business. They family owned several restaurants, and she was the manager of one of them. But before you start imaging some sort of high-end Italian establishment, we’ll tell you that her family owned a Dairy Queen restaurant.

Nicole Napolitano comes across as many things, but exceptionally educated is not always one of them. She lets her flair for the dramatic get in the way of her actual personality and sometimes comes across as a very rough around the edges type of Jersey girl rather than a college graduate who attended both St. Johns University and the American University of Rome.

If there is one thing that is true about Nicole Napolitano, it is that she is a Jersey girl through and through. She and her twin sister were born in New Jersey and have lived there their entire lives even though they like to talk about their Italian heritage. Their parents might be from Italy, but this set of twins is actually from Colts Neck, New Jersey and they haven’t left the area their entire lives.

Her Boyfriend is Not a Favorite

It turns out that Nicole Napolitano’s boyfriend, Bobby Ciasulli, might not be who he likes to say he is. Fans got to know him as a firefighter last year, immediately taking a liking to him because of his outgoing personality and his desire to save lives. However, he was accused several times throughout the season by his then-best friend now-enemy Jim Marchese of being with Nicole Napolitano only because he wanted to be famous. In fact, Jim told reporters that Bobby is a volunteer firefighter who joined the unit two months before filming so that he could look like a hardworking, blue collar guy despite the fact that he is worth a reported half billion dollars since his family owns the biggest automotive company in Jersey.

She’s not older by much, but Nicole Napolitano frequently likes to remind her twin sister that she is the older and the wiser of the two sisters. She was born just a few minutes before her sister and likes to claim the rights as the older one, and that’s all right. As the mother of twins, myself, I can state that my daughter will probably spend the rest of her life lovingly telling her twin brother she is five minutes his senior. And then he will call her old, and then they will bicker. It’s a twin thing.

The Real Housewives franchise is an interesting one. What you…