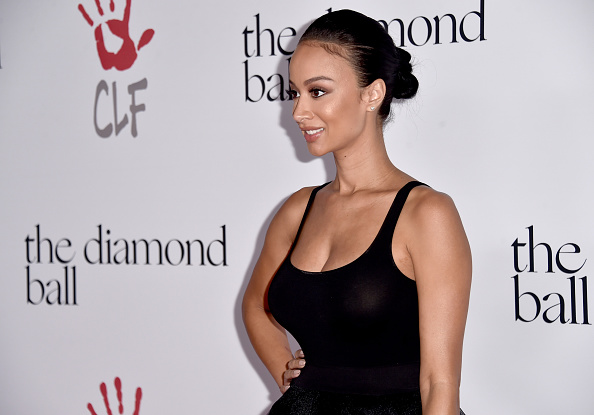 You know her from Basketball Wives: LA, and you know her from the latest headlines; Draya Michele just announced that she is expecting a baby, and she is all over the news for it. Sure, it’s happy news, but it’s more gossip than anything else given the history of her relationship with her fiancé. The two were together, then they broke up in a very public, very ugly manner. Then they got back together and got engaged. Now they are expecting a little boy together. While it is not Draya Michele or Orlando Scandrink’s first baby, it is their first baby together. Draya Michele is the mother of a 13-year-old son by the name of Kniko, and Orlando has a set of 6-year-old twins. Her relationship with the Dallas Cowboy is a bit tumultuous at times, and that’s why so many people are curious about Draya Michele; and we have a few things she might not want you to know about her.

Draya Michele might like to come off as being tough and in charge, but she’s got the same fears as everyone else. She’s not immune to fear and being scared, though she does a good job hiding it. We imagine she fears for her son’s future, she’s scared of what might happen in the world the way that it is today and we know she is scared of electrical sockets. She was once shocked by one and she is now terrified of them. We wonder how she does her hair?

She Didn’t Want Another Son

In an interview, recently, she said she really wanted a daughter and she wanted one soon. Well, she’s announced her pregnancy and the gender of the baby she’s expecting in April, and it’s another boy. Having been in that boat myself with one girl, wanting a boy and finding out I was having another girl, I know the moment of disappointment and let down you feel. However, I also know she let that go about a half second later and proceeded to welcome her future son with open arms and excitement.

She Once Worked at Hooters

Sometimes you just know that a woman wasn’t raised with a silver spoon in her mouth. You can tell based on her mannerisms and the fact that she doesn’t have that natural grace and class that women born into privilege grow up with as a second nature. So, it might not come as a surprise to anyone to know that while Draya Michele did not grow up in a wealthy household, she did work at Hooters. It taught her all the best beach songs.

There are times in life when we walk out of the supermarket with the water on the bottom of the cart and realize we forgot to pay for it, or we forget to put that bottle of water on the checkout line because the kids already finished it and tossed it into your bag. We all do it; even if we don’t mean to. Draya Michele is a thief. She stole a robe from the Vdara Hotel in Vegas more than three years ago. And she wears it every single day to put on her makeup.

Draya Michele suffers from a very common form of anger that the rest of the world does understand. She’s often hangry. When she is hungry, she feels that she becomes angry. She’s mean and she is no fun. She said there always has to be food when she’s filming or no one will film with her.

Being famous is not always what it’s cracked up to be. Draya Michele knows all about that thanks to that time in 2014 when she was sued by a nightclub at which she was slated to make an appearance. She canceled her appearance due to being excessively tired. The club then decided to sue her, claiming that she came to the event and then said that there were too many ‘gays’ there for her and she stormed out. The paperwork filed by the club, however, actually states that she did text them to say she was tired and would not be in attendance.

I am a huge fan of people who are willing to admit to their failures. I love a failure. In fact, I believe that they are the best people. When you fail and you admit it and accept it, you learn from it. When you learn from your failures, you become a winner; a success who learns how to become one step closer to making it work. Draya Michele is a failure. She tried three times to become a vegetarian and she wasn’t able to do it. Welcome to the club.

Many of us are a bit closed off about our habits and our obsessions, particularly when it comes to our addictions, but Draya Michele embraces her habits and her loves. She is a woman who once used the same shade of red nail polish on her nails for two solid years without ever changing it. She was able to overcome her addiction and has not used the color Big Apple Red in a while.

She Suffers from Sleepwalking

Don’t get too excited, though; you’re not going to see her on the news walking around nude in the streets of LA in a sleepwalking state. You might find her in the kitchen shoving cookies in her mouth, though. Girl Scout Cookie season is almost upon us, too, so it looks like that might be a real problem before too long.

If I were Draya Michele, I would be more embarrassed and more horrified by this piece of information becoming public than any other piece of information about me. That store is filled with cheap clothes that are too trendy, poorly made and look, well, cheap. No self-respecting woman shops there, but she feels 21 when she walks into the store and does her shopping. Well, we all have our imperfections and our flaws.

Since making her reality TV debut on Basketball Wives L.A….

You might know Tami Roman by a different name, but…