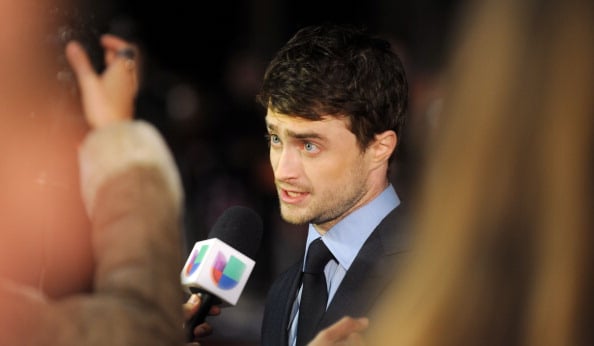 Taking a sabbatical from filming TV or movies and heading to the stage, either returning to their roots or making the brave leap into live theater, is usually a welcome change for an actor or actress. It’s also a great way to make new fans, act out classics or new plays or musicals, and prove their stuff in front of live audiences. A load of huge stars are now camping out in New York City with shows opening on Broadway this Spring. Let’s check out who.

1) Danielle Radcliffe in “The Cripple of Inishmaan”

The Harry Potter star, 24, stars in this play set on the remote island of Inishmaan, off the west coast of Ireland. When word travels that a Hollywood film is being made on the neighboring island of Inishmore,  the one person who wants to be in the film more than anybody is young Cripple Billy (Radcliffe), if only to break away from the bitter monotony of his daily life.  The New York Times raved, “Daniel Radcliffe delivers his finest performance to date. He is remarkable.” Martin McDonagh’s play is supposed to be a a comic masterpiece that examines an ordinary coming-of-age in extraordinary circumstances. This is Radcliffe’s triumphant return to Broadway following his 10-month sold out run as the star of How to Succeed in Business Without Really Trying.  Inishmaan makes its Broadway premiere on Saturday, April 12.

This powerhouse trio, along with Tony Award winner Tracy Letts ((Who’s Afraid of Virginia Woolf, Homeland) stars in this new play about love, life, friends, and neighbors. The New York Times called it “a tender, terrific new play featuring the spring’s most enticing new cast.” How could this not be true? Toni Collette is an Academy Award nominee (The Sixth Sense) and Golden Globe Winner (United States of Tara). Michael C. Hall was and will always be the acting genius who is both Dexter and David (Sixth Feet Under) and is also a Golden Globe winner and frequent stage actor. And Marisa Tomei won an Oscar for My Cousin Vinny. They all have amazing bodies of work and seeing them in one place, on one stage, is a gift from the Broadway Gods. The show is described as an outrageous, insider look at the people who live next door to you and the secrets and truths people know and share. Written by Pulitzer Prize finalist Will Eno, The Realistic Joneses opens on March 13.

Menzel is a bonafide Broadway legend and one of the all-around greatest performers to ever touch a stage. She’s a Tony Winner for her lead role in the (best) show (of all time), Wicked, and is currently Oscar-nominated for the hit song “Let It Go,” from the Frozen soundtrack. She has, no doubt, one of the best voices in the business. In If/Then, she stars as Elizabeth, a women leading parallel lives shown simultaneously, a la the Gwenyth Paltrow movie Sliding Doors. Elizabeth is a women rebuilding her life in the Big Apple and is choosing from limitless possibilities. Curtains rise for the first time on March 5.

4) Bryan Cranston in “All the Way”

The Golden Globe and 3-time Emmy winner, Bryan Cranston (Breaking Bad), plays Lyndon B. Johnson in this new suspenseful play showing in limited engagement. From Pulitzer Prize-winning playwright Robert Schenkkan, All the Way features “a company of 20 distinguished stage actors playing some of history’s most dynamic figures, including J. Edgar Hoover, Martin Luther King, Jr, Governor George Wallace, Senator Hubert Humphrey, Secretary of Defense Robert J. McNamara and LBJ himself,” as stated on the play’s website. The setting is 1964, the year a landmark civil rights bill was passed and America began its involvement in Vietnam. All the Way opened February 25.

5) Denzel Washington in “A Raisin in the Sun”

Washington, a two-time Oscar winner and frequent nominee, stars in this classic American play. The show takes place in the late ‘50s in a south side Chicago apartment and chronicles the lives of the members of an African-American family. Raisin revolves around the incongruent dreams and conflicts within three generations of the Younger family, with Washington starring as one of the adult sons in a family trying to figure out what to do with the money left behind by the death of the family’s patriarch. No doubt he is phenomenal as the son hoping to buy a liquor store and become his own man. The prejudices and struggles the family faces form this seminal American drama. The show opens March 1.

6) Debra Messing in “Outside Mullingar”

Emmy winner Messing plays one-half of neighbors Anthony and Rosemary, two introverted 40-something misfits. Rosemary lives next door to Anthony, a painfully shy man who has spent his entire life on a cattle farm in rural Ireland. Rosemary is determined to be with him but has been forced to watch the years slip away. With a land feud simmering between their families, the two of them fight their way towards happiness in a heartbreaking, funny, moving story. Sounds very Irish and interesting! February 27 marked the opening night.

7) Neil Patrick Harris in “Hedwig and the Angry Inch”

The celebrated Tony Awards host makes his way to Broadway, following the series finale of How I Met Your Mother, as the title role in this exciting revival. Harris is filling the platform go-go boots of John Cameron Mitchell, the original movie’s writer, director, and star, in this rock musical. Mitchell and Stephen Trask‘s landmark American musical is directed by Tony Award winner Michael Mayer (Spring Awakening). The show tells the tale of Hedwig, an East German transgender singer who fronts a rock and roll band after moving to America. Previews begin March 29.

Get your credit cards out, Telecharge open on your web browsers, and let the Broadway season begin!

Rihanna is one of the world’s biggest megastars in addition…

Yolanda Foster and David Foster were one of the happy…

Cedric the Entertainer has been named the new host of…

It was back in July that we first confirmed that…

Wedding bells will be ringing soon for the world’s most…