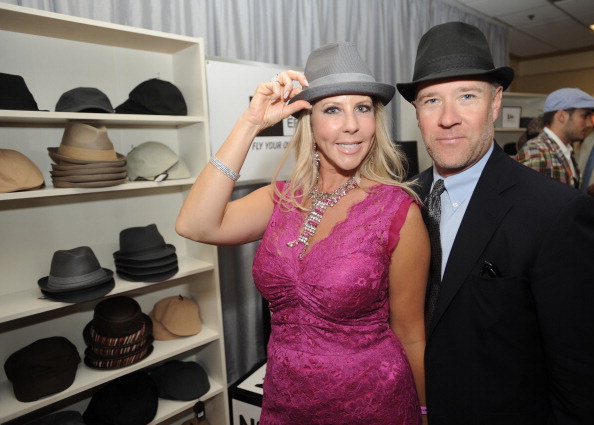 Brooks Ayers is the man we have all watched on the Real Housewives of Orange County for the past several seasons. He is the man that hails from somewhere in Mississippi and began dating the original real housewife and successful business owner Vicki Gunvalson several years ago. His reality television career has not been very kind to him, and many speculate it is because he is not a very honest and upfront person. Not one of Vicki’s friends or family members liked him from the start, and that makes things a bit difficult for the reality star.

The couple dated off and on for several years, most recently making the decision for Ayers to move into her California home with her so that she would not be lonely and so that he could continue his cancer treatments after being diagnosed a second time with cancer. However, the couple recently called it quits, and it seems that there might be a few things that happened throughout the course of the past few seasons on reality television that Ayers might just want you to forget about. Read on to find out what Brooks Ayers does not want you to know.

He Ended his Relationship with Vicki Gunvalson

Most Believe he Faked his Cancer

When he announced that he’d been diagnosed with stage three cancer for a second time, many of the things Ayers then said about his cancer did not add up. In fact, they were downright suspicious. Even as an avid watcher of the show it makes you wonder whether or not he is telling the truth, and no one wants to assume someone would be so low and so little that they would fake cancer.

He Does not Get Along with Gunvalson’s Family

Even though it seemed as if things were much better between Ayers and Gunvalson’s daughter, Brianna, the truth is that she still cannot stand him. She will not even stay at her mother’s house because he lives there and she feels that he’s trying to make her look bad by offering to go to a hotel while she’s in town so that she can stay in her own home.

Gunvalson’s Grandchildren are not Permitted to be Near Ayers

Vicki’s daughter, Brianna, is adamant that her two sons will never have a relationship with this man, and it’s because she feels that as she’s gotten to know him he is just not the kind of person that she feels her kids should be exposed to. Gunvalson and Ayers try to keep this on the down low, but Brianna is pretty outspoken about it. It has to be pretty embarrassing when your girlfriend’s kids won’t allow you in their lives.

His Net Worth is Low

Brooks Ayers is not a wealthy man by any means. He has a net worth of approximately $150 thousand, and many people believe that he has made himself comfortable with Gunvalson because he wants to live the high life but cannot afford to pay for it. There have been several instances in which other housewives have accused him of this type of behavior and he has become very angry over it, claiming that it is not the truth.

There’s a Chance he is Still Married

Rumors circulating the internet have Ayers still married to his ex-wife, Kim, even though he was living with and dating Vicki for four years. There is some speculation that he and the mother of his children never did get a divorce, but no one seems to be able to prove whether or not this is actually true information or if it is false.

He’s got an Illegitimate Child

While still married to his ex-wife, he fathered a child with another woman. There is no real information available online about the woman with whom he had a child while married to his wife, nor are there any mentions of his kids on the show. He does not discuss their ages, so we are not certain how long ago this happened in his life, but it’s been a rumor that has been around since he began dating the reality television star.

He’s Behind on Child Support

Several seasons ago when Gretchen Rossi was a real housewife, Gunvalson was all up in arms about her boyfriend’s lack of a job and his lack of ability to pay his child support, yet it seems that Ayers has the same problem. In fact, it seems that he might even have a bigger problem paying his back child support and it might be the reason why he moved to California so that he could get away from his exes.

Ayers was, and is, no amazing man. He’s been arrested two times for his failure to pay his child support and he has been arrested for a DUI. All of that is just within the past decade, too. There could be other arrests in his past that we are not aware of, but with so many in his recent past it seems almost as if there is nothing really worth looking into.

For many years, Gunvalson said that Ayers is a businessman. He’s a businessman. This could encompass so many things in his life, such as the fact that he actually has no job. Perhaps because of his cancer he had to leave his job, but there are so many discrepancies in his story about that, including the fact that he has stage three cancer and decided to just end his treatments, that he looks better than ever (not typical of a cancer patient) or that one of the housewives called his doctor to talk about cancer only to realize that his doctor is not one that works with cancer patients that it makes it difficult to believe him.

She is among the most interesting of all the housewives,…