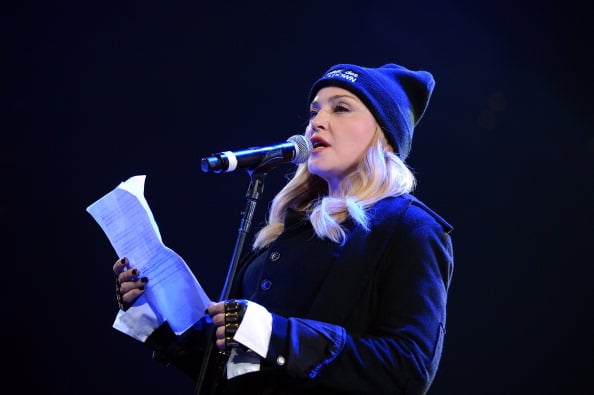 Madonna recently announced that she is underway working on her 13th studio album. She teased of a secret collaboration and on Friday, the Material Girl may have given away the big secret.

The ever-evolving music legend posted an Instagram photo stating that she was about to hit the studio with the Swedish DJ and music producer. They could be working on a different project (one not for her studio album) but either way, we can all look forward to this awesome collaboration.

Madonna captioned the photo: “Doing some house work after 4 hours of sleep which is why i cant spell! On my way to the studio to work with Avicii! #clean”

Avicii has become enormous in the last year, with his hit “Wake Me Up” recently peaking at No. 4 on the Billboard Hot 100. His song, “Hey Brother,” is also currently on the Hot 100 charts. Avicii previously remixed “Girl Gone Wild” from Madonna’s 2012 album MDNA. Madonna’s modern music is a perfect fit with Avicii, as they fit into the electronic and dance-heavy genre. The 55-year old singer made a surprise appearance during the DJ’s set at the 2012 Ultra Music Festival.

There is currently no release date scheduled for Madonna’s 13th studio album. In order to prove to naysayers who claim that MDNA was a failure, Madonna needs a big hit to come from the album. MDNA debuted at No. 1 on the Billboard chart, earned lukewarm reviews, and then but then fell hurriedly and neglected to produce a second Top 10 hit following “Give Me All Your Luvin.” Her last major album was “Ray of Light” in 1998.

When Vine, a video sharing social networking platform, hit the…

I have to admit, Bradley Cooper has been impressing me…

Beyonce and Jay Z are giving fans extra to be…

Is Justin Timberlake about to join the dad club? It…

Gee, could anyone have predicted that Chris Brown would be…

Critics dubbed USA Today “McPaper” when it debuted in 1982,…