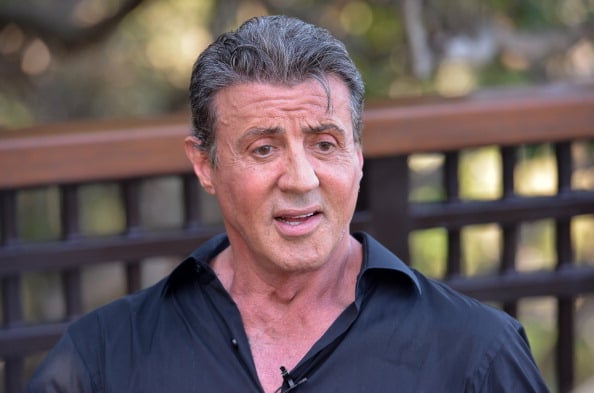 Sylvester Stallone is an American actor with an estimated net worth of $400 million. He was born July 6, 1946 to Frank Stallone and Jackie Stallone in New York City. His mother was an astrologer and promoter of women’s wrestling and his father a beautician and hairdresser. He was raised with his younger brother, named after his father, who is also an actor. Born to a mother who went through complications at birth, Stallone suffered some health issues because of a decision made by doctors. Doctors in the delivery room used two pair of forceps to deliver the actor, and that caused part of his face to become paralyzed. Sylvester Stallone is known for his snarling look, but it’s only because his chin, a portion of his lip and a portion of his chin are paralyzed.

Sylvester Stallone was not a great student, so his mother made him get a part time job before he graduated high school to help him learn responsibility so that he could eventually go on to attend the University of Miami. When he was done with college and living in New York City, he finally got his big break in the movie business. It wasn’t something he was proud of at the time, but he felt he had no choice. He’d been evicted and was living out of the Port Authority Bus Terminal for several weeks as a homeless man when he saw an ad for someone to act in a soft core pornographic movie that would pay him $200 a day. In those times, that was a lot of money, and he took the job.

1970 brought a few roles to the actor, but he was not able to find real fame until he starred in the hit movie, Rocky, in 1976. The movie has gone down in history as one of the most iconic movies of all time, and it’s one that made Sylvester Stallone the famous actor he is today. He went to a Muhammad Ali-Chuck Wepner fight one night in March 1975 and came home and spent 3 days writing the script for Rocky.

When he tried to sell the film, he was offered $350,000 for the script by Irwin Winkler and Robert Chartoff, but they refused to allow him to play the lead character. They wanted either Robert Redford or Burt Reynolds, but Stallone refused to sell the script without being the lead actor. It was then that he took a pay cut for the script and the job as the main character, and went down in history. The film was nominated for 10 Academy Awards, and it was Stallone who scored nominations for best actor and best screenplay. Those did not win, but the movie did take home awards for Best Picture, Best Directing and Best Film Editing.

He went on after that to write and star in more Rocky movies, as well as dozens of other films. His role in that one film, however, is what makes him famous. He’s been a working actor for decades, but nothing has made him nearly as famous as that one role, and much of his net worth comes from that, though he’s paid well for everything else he’s done since then.

Eminem is an American rapper with an estimated net worth…

Channing Tatum is an American actor with an estimated net…

Lisa Vanderpump is a British reality television star and restauranteur…

Lena Dunham is an American actress and writer with an…

Steve Wozniak is the co-founder of Apple and he has…

Candice Swanepoel is a South African model with an estimated…