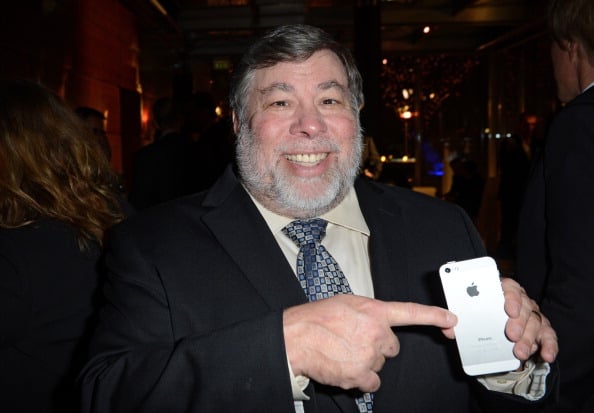 Steve Wozniak is the co-founder of Apple and he has an estimated net worth of $100 million. Born August 11, 1950 to Jacob and Margaret Wozniak in San Jose, California, he grew up to become the co-founder of one of the most successful brands in the world. He goes by the name Woz on most occasions, and he is known for working closely with the late Steve Jobs to create a brand known as Apple, which is credited with introducing the “i” to the world (iPhone, iPad, iMac, etc.).  A relatively unexciting childhood led to a very exciting life later on. It was 1971 when Wozniak was introduced to Steve Jobs when the two were mere high school students at Homestead High. They became fast friends, and their ideas began brewing when Jobs began working as a summer employee for HP with Wozniak.

The two worked together to create circuit boards for Atari, with Woz doing the primary bulk of the work and Jobs doing the marketing for it. It was 1975 when Steve Wozniak began to design his first computer, called the Apple I. It was entirely his work, but Jobs had a wonderful idea to market the computer and sell it. The rest, they say, is history. A year later, they formed the business Apple Computer, and they began to develop the brand we know and love so much today.

In 1981, Steve Wozniak was piloting a small plane that crashed soon after takeoff, injuring him and his three passengers. He suffered a significant head injury that caused him to suffer from short-term amnesia that no longer allowed him to create new memories. He was unable to return to work following the crash, leaving Jobs in charge. It would be two years before Wozniak was able to return to work completely. Two years later, in 1985, he sold the vast majority of his stock and claimed that Apple was headed in a direction that was all wrong, and left the company. He began teaching.

Today, Steve Wozniak is still a part of the Apple company thanks to the fact that he remained close to Steve Jobs. The company pays him a stipend of $120,000 per year, and he still stands as a shareholder in the company. Of course, he sold the vast majority of his stock and ended up not becoming nearly as wealthy as his former partner. However, he maintained in an interview in 2006 that he and Jobs were not friends and that Jobs was not good at his career, and that the products he created were weak and were not good enough. The world seems to disagree with his sentiments on the Apple Product.

Over the past decade, he’s founded, closed and moved companies on numerous occasions, and it’s those businesses that have given Steve Wozniak the bulk of his $100 million fortune. He’s spent the better part of the past few years making public appearances on reality television and as keynote speaker at tech conventions.

Jaden Smith is an American actor with an estimated net…

Channing Tatum is an American actor with an estimated net…

Tim Duncan is a professional basketball player with a net…

Ariana Grande is an American singer and actress with an…

Amber Rose is an American model with an estimated net…

Alexander Skarsgard is a Swedish actor with an estimated net…