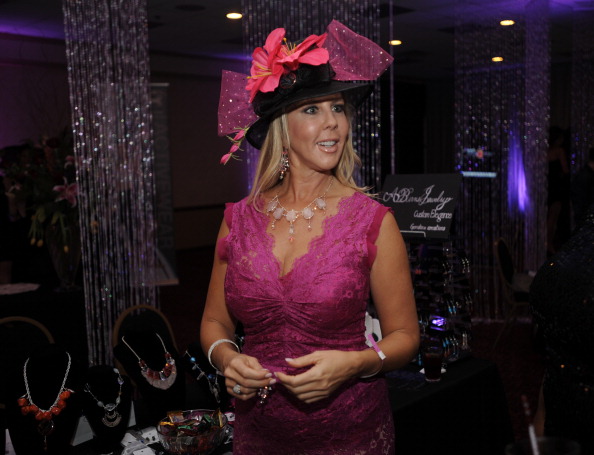 Vicki Gunvalson is the Original Girl of the O.C. Housewives franchise – and that makes her the OG of the entire housewives franchise since Orange County came first and foremost. She is the housewife with her own insurance company and the ability to care for herself without a man there to do it for her. She loves her independence, and she’s twice divorced. She has two kids and two grandsons and she wishes her daughter, son-in-law and grandsons lived a little bit closer to home where they could enjoy one another a little bit more (they currently reside in Oklahoma).

Vicki Gunvalson has had some issues. She’s normally the “Whoop it up” queen and a lot of fun, but this season saw her become the target of criticism, anger and hurt by the other housewives. Usually a voice of reason and sometimes kind of a bully who simply will not let things go, Gunvalson’s relationship with the nasty Brooks Ayers became a hotter than ever topic on the most recent season; particularly as it pertained to his alleged cancer diagnosis. We say alleged because, well, no one really believes he has cancer. On that note, we thought we might go ahead and see what types of lies that Vicki Gunvalson has told over the years to save herself, to make herself look better or the take up for her man (thank goodness, her ex-man).

I Didn’t Know He Had Cancer

Vicki Gunvalson’s biggest lie to date is the fact that she did not know Brooks Ayers did not have cancer. She knew, and she worked very hard to make sure that everyone believed he had cancer. Why? We don’t actually know. The simple fact of the matter is that she clearly lied about it, and admitted to lying about certain things, because she wanted her friends to stop calling him a liar. If she was willing to make up stories, fabricate things and make it a point to lie for him to cover up his cover-up, she knew. Someone who really believes that the man they love has been diagnosed with cancer would never have to make up stories of him being sick, of doctors being called and of things that she made up unless she knew he wasn’t sick and made these things up to make it seem as if he was.

The best case scenario in this situation is that she suspected her girlfriends were correct in that Brooks Ayers does not have cancer, and she was trying really hard to make even herself believe that no one would lie about something like this. This simple fact of the matter is that this man has had every opportunity in the world to prove he does have cancer; he could have his doctor, his doctor’s staff and anyone that has been in chemo with him come forward to talk about it, but he does not. It seems to us that living with cancer would be very difficult, and that this added stress of being called a liar would make it worse. Personally speaking, I’d let my doctor talk to any and everyone if I had cancer and the world was trying to say I did not; shut it down right away and move on from the rumors and the stress of constantly being called a liar.

I Did not Cheat on Donn

There was a time when Vicki Gunvalson said she did not cheat on Donn and that their marriage was just over because they could no longer agree to get alone. However, she later admitted that she did cheat on her husband and that she was unfaithful. She does not name Brooks Ayers as the man with whom she engaged in an extramarital affair, but she did begin dating him immediately after announcing her split from Donn.

Brooks was Good to Me

Perhaps, aside from the cancer lie, the biggest lie that Vicki Gunvalson told the world was that she was happy with Brooks and that he was good to her. Enough of Vicki Gunvalson’s friends have come forward with stories of things that they’ve witnessed Brooks doing and saying to Vicki that it’s doubtful he was very nice to her at all. When Vicki Gunvalson’s own daughter and her husband came forward to say that they had to remove Brooks from Vicki when he was shaking her so hard her head was snapping back and forth, the world knew that Vicki was lying about the kind of man that Books was.

Vicki Gunvalson has proved herself quite the liar in the past year, but we hesitate to crucify her at this point. It’s proven that when a man is abusive in any way to a woman, she becomes scared of him and will do whatever it takes to rectify the situation. In this case, it might be a case of abuse so bad that Vicki is no longer sure what is reality and what is not. We definitely do not get the warm fuzzies from this man – as no one who has ever met him on the show has – and we know that he is someone who is not a good person. He’s lied about cancer, he’s hit on his girlfriend’s pregnant daughter, and does anyone remember that time he told the son-in-law that he would hit Brianna or Vicki if they  misbehaved? Yeah, he is not a winner in anyone’s book but his own.

She is among the most interesting of all the housewives,…